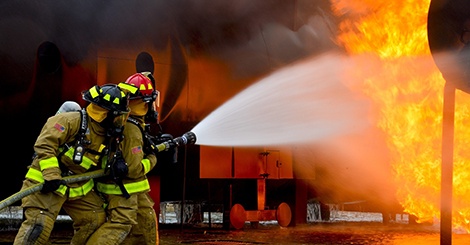 One dark night outside a small town, a fire started inside the local chemical plant. Before long it exploded into flames and an alarm went out to fire departments from miles around.

After fighting the fire for over an hour, the chemical company president approached the fire chief and said,

“All of our secret formulas are in the vault in the center of the plant. They must be saved! I will give $50,000 to the engine company that brings them out safely!”

As soon as the chief heard this, he ordered the firemen to strengthen their attack on the blaze. After two more hours of attacking the fire, the president of the company offered $100,000 to the engine company that could bring out the company’s secret files.

From the distance, a long siren was heard and another fire truck came into sight. It was a local volunteer fire company composed entirely of men over 65. To everyone’s amazement, the little fire engine raced through the chemical plant gates and drove straight into the middle of the inferno. In the distance the other firemen watched as the old timers hopped off of their rig and began to fight the fire with an effort that they had never seen before. After an hour of intense fighting, the volunteer company had extinguished the fire and saved the secret formulas. Joyous, the chemical company president announced that he would double the reward to $200,000 and walked over to personally thank each of the volunteers. After thanking each of the old men individually, the president asked the group what they intended to do with the reward money.