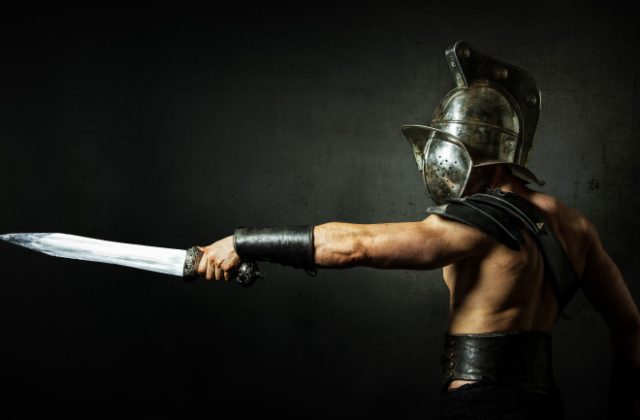 The following historic event mirrors the example of our Savior.  Jesus is quoted in John 15, “Greater love hath no man than this, that a man lay down his life for his friends.” Joh 15:13

Rome was celebrating its temporary victory over Alaric the Goth in its usual manner, by watching gladiators fight to the death in the arena, when suddenly there was an interruption. A rudely clad robed figure boldly leaped down into the arena. Telemachus was one of the hermits who devoted themselves to a holy life of prayer and self-denial and kept themselves apart from the wicked life of Rome. Although few of the Roman citizens followed their example, most of them had great respect for these hermits, and the few who recognized Telemachus knew he had come from the wilds of Asia on a pilgrimage to visit churches and celebrate Christmas in Rome.

Without hesitating an instant, Telemachus advanced upon two gladiators who were engaged in their life-and-death struggle. Laying a hand on one of them, he sternly reproved him for shedding innocent blood, and then, turning toward the thousands of angry faces around him, called to them: “Do not repay God’s mercy in turning away the swords of your enemies by murdering each other!”

Angry shouts drowned out his voice. “This is no place for preaching! On with the combat!” Pushing Telemachus aside, the two gladiators prepared to continue their combat, but Telemachus stepped between them. Enraged at the interference of an outsider with their chosen vocation, the gladiators turned on Telemachus and stabbed him to death.

The crowd fell silent, shocked by the death of this holy man, but his death had not been in vain, for from that day on, no more gladiators ever went into combat in the Colosseum.  Source: Foxe’s Christian Martyrs of the World, pp. 26-27

May you grasp the significance of Christ’s sacrificial love today, Pastor Larry