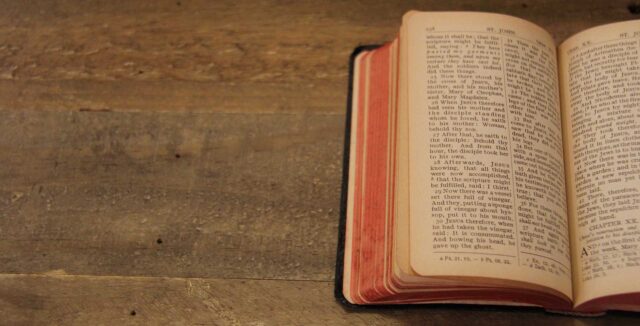 CAN YOU FIND 30 BOOKS OF THE BIBLE IN THE FOLLOWING PARAGRAPH?

My friend Matt, he was always fooling around. I never can get him to act serious for a minute. In class the teacher put Jon ahead of him and even though she could hear the sound of paper wrappers she couldn’t tell who’s eating the candy. I told him to be careful — he’s already in a jam especially since he skipped school yesterday. Today I was appointed captain of the boys’ spelling bee. Joe lost, so I put him at the bottom of the list, but Dan I elevated to the top. I came in number six. Joe was sore, he forgot about putting “i before e” and missed a few words, and I wondered: is “a i ahead of an e” always the rule? Jo Bob, a fast kid, brought a St. Bernard to school for “show & tell”, but worried it was too big. The teacher had to reassure him, “Yes, there’s enough room for him.” John brought a weasel-like animal to class, it was an “ermine”. This was his second pet ermine, his first pet ermine died. His sister Lulu kept feeding it too much and then said the cat killed it, but there wasn’t a mark on it. Another boy, Jude, brought a blue hummingbird, and I have never seen a hummingbird as big as it was. A kid named Gene also brought a blue hummingbird, but they are easy to tell apart, Gene’s is the small hummingbird. Well, after school my Dad picked me up on his way to the E-Z Radiator repair shop. When he saw Matt coming with me, he whispered, “Who is this creep?” “He’s,” I answered “just a classmate.” At the radiator shop the man said we need a new radiator and my Dad said, “OK”. He had to admit it uses a lot of water. The repairman was a real character, he was drinking some beer he said he brews himself & eating a ham sandwich he call a “Ham a-la-chives” as he watched the horse races on TV. He was complaining because his horse was losing as we watched and saw some old hag gaining on his sorry horse. I was thinking to myself, “Well isn’t that just too bad,” I, a horse lover, could have told that seeing his horse. Then he even told us how he hated radiator repair work because he felt like he was just in a rut here at the shop. Then he asked me, “What would it be if I just up and quit this place one day?” “A big Co. loss.” I answered. I knew that’s what he wanted to hear.  Well I must say the whole thing was a most interesting revelation.